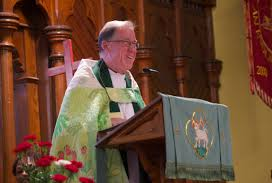 Archbishop Fred Hiltz fasted for the Climate on Friday, March 6, 2015. The Primate of the Anglican Church of Canada and President of the PWRDF Board of Directors, joined other faith leaders, politicians and environmentalists for the 365 Rolling Fast for the Climate that began on December 1, 2014 at the UN climate conference in Lima, Peru, and will end November 30, the first day of the climate conference in Paris, France.

“As I ‘choose’ to refrain from eating for the day I know that the next day I can and will eat. Millions can’t and won’t. For them there is ‘no choice’ in the matter. Through PWRDF’s Food Security Program I have learned that the number of malnourished people worldwide is just under one billion people – the entire combined populations of Canada, the United States and Europe – nearly 1/7 of the world’s population,” said Archbishop Hiltz.

He continued, “It troubles me that in the midst of the world’s more than fifty million refugees, a rapidly growing segment is environmentally displaced peoples. Climate Change has so impacted their lands and waterways that they are forced to be on the move.”

More than 365 people worldwide are participating in this one-year fasting chain, initiated by the Fast For The Climate in solidarity with vulnerable people who are most affected by dangerous climate impacts. Included on this list are Bishop Susan Johnson, National Bishop of the Evangelical Lutheran Church in Canada, John Nduna, General Secretary of the ACT Alliance, Bishop Mark MacDonald, national Indigenous Bishop, and Archbishop Rowan Williams, former Archbishop of Canterbury.

Adele Finney, PWRDF’s Executive Director, and others in the PWRDF network are fasting in solidarity with Archbishop Hiltz.

The Fast for the Climate began at the climate talks in Warsaw in 2013. Typhoon Haiyan had just devastated the Philippines that November, and climate commissioner Yeb Saño, whose own family was caught up in the disaster that killed thousands and destroyed the homes and livelihoods of millions, announced in a moving speech that he would not eat until countries at the Warsaw conference delivered actions that would ‘stop the madness’ of the climate crisis.

Hundreds of others from around the world chose to fast with him in solidarity. The Fast For The Climate has grown into global movement with participation of youth groups, environmental groups and faith-based groups who all want urgent action on climate change by governments this year.

If you wish to participate please visit the Fast for the Climate website and consider:

1. Joining +Fred in fasting (you can find a guide at http://fastfortheclimate.org/en/#tab4-tab )

2. Sign up as a faster at http://fastfortheclimate.org/en/ (PWRDF is signed up as an organizational supporter)

3. Invite others to fast

4. Let Carolyn Vanderlip know that you are fasting
Posted by The Green Market Oracle at 4:21 AM