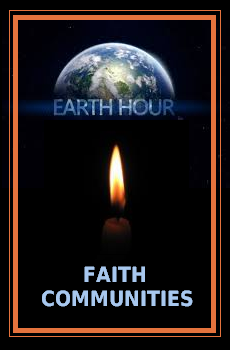 In addition to turning out their lights, faith communities around the world commemorated last Saturday's Earth Hour in a variety of ways including prayer services and concerts. This year's World Wildlife Fund Earth Hour festivities included hundreds of millions of people from all walks of life. Events took place in more than 7000 cities in 172 countries. To support climate action, churches, mosques, synagogues and temples were among those that turned off their lights from 8:30 to 9:30 p.m. on Saturday March 28th.

In Vatican city, St. Peter’s Basilica joined iconic landmarks around the world to take a stand for stronger climate action. Rome’s Great Synagogue and Great Mosque also took part, along with other religious sites, like St. Basil's Cathedral in Moscow.

At Montreal's Christ Church Cathedral the lights went out and candles were lit as five choirs of young singers presented a programme of music on the theme of light and hope.

In Oakville Ontario, Earth Hour was observed by the Catholic school board. Oakville’s St. Jude’s Anglican Church, celebrated Earth Hour with its eighth annual Earth Hour Concert. The concert began at 8:15 p.m. and the lights went out at 8:30 p.m. The Earth Hour Benefit Concert at St. Jude’s was held in support of GreeningSacredPlaces.net and featured songs and prayers for the Earth.

In Toronto there was a candlelit Taize prayer service in honor of Earth Hour at St. Basil's Parish. Also in Toronto Jewish Chanting, Havdalah & Live Music took place at Eastminster Auditorium to commemorate Earth Hour. They marked the end of Shabbat amid flickering candlelight and celebrated Earth Hour as a community with an evening of live music from their community members.

UK churches also were involved. The lights in St Wulfram’s Church in Granthum UK went out on Saturday to mark Earth Hour. Fr Stuart Cradduck, The Rector of Grantham, said: "We are always keen to participate in such important global initiatives and hope other venues can join in too."

Other UK churches staged concerts by candlelight to commemorate Earth Hour. One such concert was held at St John the Baptist Church in Axbridge Somerset, England. The Axbridge Earth Hour Music Group come together each year to provide an hour of musical entertainment.

In the US a number of faith based communities celebrated Earth Hour. An Earth Hour prayer service was held at the Queen of Peace Chapel of Lourdes University, in Sylvania, Ohio.
Posted by The Green Market Oracle at 6:49 AM