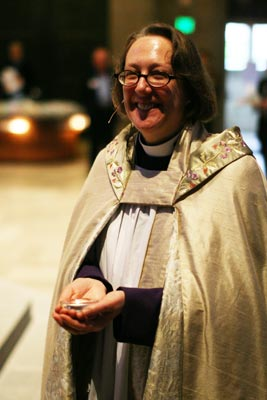 With degrees from Oxford and Harvard, Rev. Jane Shaw blends her faith with intellect and perceives a broader spiritual path. Shaw is the new dean of religious life at Stanford University with a personal belief system bridging the patriarchal past with the faithful future.

Shaw was awarded her position as professor and Stanford Dean just last year. An Anglican priest and historian from Grace Cathedral in San Francisco, California, she brings a fresh perspective to religious studies. Not only was she the first female to lead the San Francisco church, she is also a lesbian. Shaw infuses many important interests into the topic of religious life, such as inclusiveness, the arts, and environmental sustainability.

Discussing what she felt was the most important issue of our time, Rev Jane Shaw told Palo Alto Online, “I think the great crisis of our day is climate change, and the environment. So, I’d rather hope that more people would take that seriously, and begin to think and reflect on what they are doing with their own lives.”

In addition to her views on the environment, Rev Jane Shaw has a welcome approach to religious inclusion. “I don’t think church should be more churchy,” she said. “I think church is about, anyone should be welcome. I’m really interested in how you welcome many different kind of constituencies, certainly not convert them, not even necessarily do religion all the time.”

Of course, when someone new and imaginative stares audaciously into the face of tradition, there is usually backlash gathering in the wings. With her activism for female religious leaders, and support for LGBT Christians, Shaw is drawing the ire of the notorious King of Rant, Rush Limbaugh.

In a recent rant, Limbaugh ripped into Rev Jane Shaw’s views. “What does it even mean, ‘not necessary to do religion’? What do you mean, do religion? What does that even mean? Stop praying? Stop singing? Stop doing sermons? Stop reading the Bible? What does it mean? Oh, by the way, she happens to be an LGBT activist and a lesbian. And she’s the dean of religious life.”

It shouldn’t go unnoticed that Limbaugh took Rev Jane Shaw’s words out of context, inaccurately quoting her so as to twist her words. It’s not shocking to hear that Shaw was recommending we don’t do religion “all the time” – as in “every moment we’re in church.” Churches often hold “extra-curricular” activities, so Limbaugh took his no-longer-shocking liberty to tweak her words into something a bit more rant-worthy.

Well, no surprise there. It’s easy to jerk the chain of a shock jock, but faith leaders often do walk a fine line in their daily work. Rev Jane Shaw is bound to attract attention, given her background, and her innovative ways of combining traditions with modern life. Shaw is a highly visible representative of a large shift of people from differing backgrounds uniting together to bring attention to Earth’s environmental needs.

From this perspective, Shaw’s views are very similar to other professors and a growing contingent of faith leaders who want more focus on both inclusiveness and sustainability.

As the frame of spiritual ecology broadens its borders, Stanford, Harvard, and other institutions are offering innovative education and enlightened student egagement, as well as exciting outreach to their local communities.

Innovative bridges are under construction. Faith, intellect, and culture, the three pillars of power for effective action, are visibly starting to rise in unison. As higher education combines these elements and inspires new generations, it is possible that even patriarchal parents will follow them on the bridges they build into a faithful future for all of God’s Creation.

Source: Eden Keeper
Posted by The Green Market Oracle at 11:04 AM