Summary of Activities in 2015 (Stewardship of the Environment Committee) 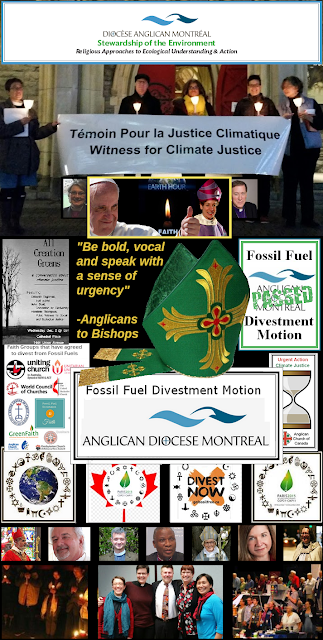 After a brief hiatus, the Stewardship of the Environment Committee is back with a new constitution and a new vision. We begin the new year with a review of our activities in 2015. As we reflect on the events of last year we are forced to concede that it was a momentous year. People of faith helped to advance climate action both on the world stage and locally.  We are grateful for those who strive to care for creation and for those who worked towards the positive outcome at COP21 and the successful passage of the fossil fuel divestment motion in the Anglican Diocese of Montreal.

The Stewardship of the Environment Committee humbly appreciates all the support that it has received over the last 12 months. We would like to thank the consultants to our committee: Raymond Noel, Diane Norman and Afra Tucker. We would also like to thank Rev. Rhonda Waters, Deborah Tagornak, Henriette Thompson and John Scott for their contributions to our climate justice events in December.

Last year our primary areas of focus were faith and environmentalism, Pope Francis, fossil fuel divestment, and the Paris climate talks. As part of our expanding social media presence we posted 88 articles on our blog, Facebook page and Twitter feed, we supported 9 events and organized 3 actions. During the course of the year we prepared and supported the divestment motion that was passed in the Anglican Diocese of Montreal in October. Along with Christ Church Cathedral, we also organized a speakers conference and candlelight vigil in support of COP21.

Read more »
Posted by The Green Market Oracle at 8:08 PM No comments: