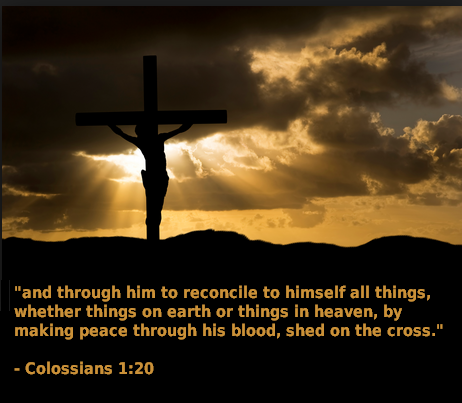 A Good Friday call for climate justice from the Archbishop of Cape Town, the Most Revd Dr Thabo Makgoba, Chair of the Anglican Communion Environmental Network.

On this Good Friday, we reflect on the meaning of Christ’s sacrifice on the cross. Our view of salvation has often focused on our individual souls and journey to heaven. Our responsibility to care for God’s Creation has been overlooked or ignored. We have acted as if Christ only died to save the human race. The truth of the redemption of all things in Christ, which is the message of the life-giving cross, must be reclaimed (Colossians 1:20).

Last month I invited a group of Anglican Bishops from those parts of the world most impacted by climate change to strategize around the response of the Anglican Church which consists of more than 85 million people. As the Bishops shared their stories, our hearts were broken as we heard of the destruction caused by the hurricane in the Philippines and the devastation in Fiji, where sea level rise is threatening to displace whole communities with the consequent loss of culture and identity. We mourned the loss of the lungs of our planet through deforestation in the Amazon, and the devastating effects of acidification of seawater and depleted fishing grounds; the impacts of air pollution and destructive mining and energy extraction and transportation practices.

In the face of such environmental degradation what does it mean to believe that “God so loved the world that He sent his only begotten son?” (John 3:16). Interestingly in the original Greek this verse would read “God so loved the cosmos”. So if God sent His son to save the whole cosmos and not just the people in it, what does that mean for us?

I would like to share with you some of our reflections as a group of Bishops gathered together from different parts of the globe.

Climate change is a spiritual problem as well as an economic, scientific and political one, because the block to effective action relates to basic existential issues of how human life is framed and valued. These issues include the competing moral claims of present and future generations, human versus non-human interests, and how the lifestyle of wealthy countries is to be balanced against the basic needs of the developing world. For this reason people of faith must urgently find their collective moral voice.

Climate justice for us as Christians demands a faith response.

Creation is holy, and we are called to serve and protect the earth now and for future generations (Genesis 2:15). We have been complicit in a theology of dominion (Genesis 1:26), and now realize that human dominion over the earth can only be exercised in the light of Jesus’ command that the greatest is the one who serves (Luke 22.26).

We believe that the voices of Indigenous peoples, whose relationship with creation remains integral to their spirituality and relationship with God, is of central importance to ongoing ministry on climate justice. We are painfully aware that women frequently bear a disproportionate burden of climate change largely because they make up the majority of the world’s poor and are often more dependent for their livelihood on natural resources threatened by climate change.

There is a compelling need to listen to the voices of our youth who will inherit the challenges and catastrophes we fail to address. We believe the issue of climate change is a moral issue at its heart.

Attending to the current and future life and health of our planet will require sacrifices now, both personal and collective, a deeper appreciation of the interdependence of all creation, and a genuine commitment to repentance, reconciliation and redemption.

We accept the evidence of science concerning the contribution of human activity to the climate crisis and the disproportionate role played by fossil-fuel based economies. Although climate scientists have for many years warned of the consequences of inaction there is an alarming lack of global agreement about the way forward.

To live in the way of our Saviour, who reconciles all of Creation to himself, we therefore committed ourselves to the following initial actions and to developing a strategic plan of action in the months ahead. The initiatives listed below are our first steps and we invite people of faith and goodwill everywhere to join us in these endeavours:

• To fast for climate justice on the first day of every month in solidarity with the earth
• To strengthen our ecumenical and inter-faith partnerships globally and locally, standing in solidarity with all people of goodwill in response to the climate crisis.
• To develop and distribute educational materials on climate justice and Care for Creation
• To review our churches’ investment practices with a view to supporting environmental sustainability and justice by divesting from industries involved primarily in the extraction or distribution of fossil fuels.
• To implement energy conservation measures in church buildings and move to renewable energy sources as quickly as possible.
• To conserve water and recycle waste around church buildings and properties.
• To nurture biodiversity on church land by creating safe habitat for indigenous species and to support local communities by sharing land resources for local food production.
• To advocate for sustainable water, food, and agricultural practices in our communities
We also call upon political, economic, social and religious leaders in our various countries to address the climate change crisis as the most urgent moral issue of our day.

We urge them to:

• Work with all possible commitment and speed toward fair, ambitious, accountable and binding climate change agreements at national and international levels.
• Move from dependence on fossil fuels to renewable energy on a national level
• Develop policies that genuinely assist environmental and climate refugees and promote mechanisms of intergovernmental co-operation that ensure their human rights, safety and resettlement.
The covetous desires of people and nations to possess what is not their own, Father, forgive.
The greed which exploits the work of human hands and lays waste the earth, Father, forgive.

#GoodFriday
Posted by The Green Market Oracle at 4:58 AM