What the Climate Movement Must Learn from Religion 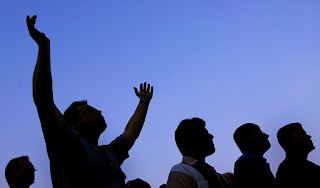 Last September 40,000 people attended London’s largest ever climate march. This was a big achievement for an issue that struggles to catch people’s attention. After all, as psychologists point out, it is notoriously hard to mobilise people around issues that are invisible, uncertain, set in the future and require them to make sacrifices.

Or is it? This Easter, more than 2 million people will attend church in Britain to celebrate the Christian resurrection. They will agree to constrain their most primal drives in return for long-term rewards that are not just uncertain but fundamentally unknowable.

Put this way it seems obvious that the climate movement might learn some important lessons from religions – the world’s oldest and, in many countries, fastest growing movements. But to say so is anathema and contravenes two rigidly policed boundaries: one between science and faith, and the other between liberal environmentalism and conservative religions. Climate scientists are particularly keen to keep well away from the language of belief. Australia’s chief scientist, Ian Chubb, complains: “I am asked every day ‘do you believe in climate change?’ But it’s not a belief. It’s an understanding and interpretation of the evidence.”

Evidence, though, comes in many forms. Social research shows clearly that the scientific data of climate change has proven unable to galvanise action. Cognitive psychology, supported in recent years by brain neuro-imaging, provides plentiful evidence that our analytic reasoning may accept the data but that we are only compelled to act by emotional triggers based on our values and core identity.

“Belief” is a poisoned word, mocked by sceptical pundits like Nigel Lawson who calls climate change a “new religion” Comparing empirical science with spiritual revelation is absurd and denigrates both sides. Climate change is not a belief. But it is a conviction: a condition of strongly held opinion, attained through a process of evaluation, leading to a commitment. We know virtually nothing about how people achieve their climate conviction because scientists and activists always assume that it is absorbed, as though through osmosis, by reading a book or watching a documentary. If Christianity were promoted like climate change, all it would need would be a few Gideon’s Bibles and a website.

However, religions understand the process of conviction very well. They have to. The world’s great religions are the winners from thousands of competing religions that managed to find the formulae for moving, exciting and persuading people.

Few have continued the experiments more consistently than the evangelical preachers who compete every day in the cultural marketplace for new converts and donors. Among them is Joel Hunter, the charismatic pastor of Northland church, the 30th largest “megachurch” in the USA.

Hunter preaches often, over the objections of his conservative church members, that climate change is a threat to God’s creation, which he shares with them as a personal “epiphany”. Hunter is an exceptionally skilled social organiser – having built his own congregation to over 15,000 – and enthusiastically accepted my invitation to draw out some key lessons for the climate movement. Advertisement

For Hunter conviction needs to be carefully nurtured. The creation of a supportive community is essential. Only with this can people openly express their doubts and be offered help to “walk through it together”. He then brings people to a moment of choice and invites them to make a public commitment. In evangelical crusades people are called upon to step forward to accept a change in their life – what Billy Graham called the “altar call”. Finally, Hunter says, demonstrating this commitment to the unconvinced should then become a central part of people’s activism.

John Houghton is the founding co-chair of Intergovernmental Panel on Climate Change and a Methodist lay preacher. In 2002 he created an “altar call” for US evangelical leaders – many of them deeply sceptical about climate change – following a week of scientific study and prayer at Oxford University. Among those attendingwas Richard Cizik,then the lead political spokesperson for the National Association of Evangelicals, and one of the most powerful figures in the Christian right. To the horror of his colleagues, when Cizik returned he began talking about his “road to Damascus conversion to climate change” all over the US media. Like Houghton, Professor Brian Hoskins, the director of the Grantham Institute for Climate Change, argues that scientific information needs this transformative moment. “Often what we do is provide the landscape in which Saint Paul can have his moment. We are creating the ether in which people can have that illumination.”

Illumination? Conversion? Witness? Epiphany? These words never appear in the discussions of how we might engage people with climate change. Campaigners adopt some of the components – attending a march is a form of public commitment – but without understanding the entire package. Our websites and blogs proliferate, but we invest little in building a real-life community. We talk incessantly with each other but avoid looking beyond our own tribe. We must reclaim the climate change debate from the political extremes

Because environmentalists do not recognise conviction, we do not recognise despair or grief. We have contempt for doubt and no one is ever at hand to “walk through it together”. We expect people to deal with their hopes and fears in isolation, constrained by a socially policed silence and given no encouragement other than a few energy-saving consumer choices and the odd petition. Nor is there any discussion of forgiveness for ourselves or our forebears. As Hunter pointed out to me, we give people a heavy moral load of guilt, responsibility and blame, but no way out. The critics are right in this regard – if climate change really were a religion, it would be a wretched one, offering guilt, blame and fear but with no recourse to salvation or forgiveness.

Our understanding of climate change is built on scientific evidence, not faith. The faith displayed in the churches, mosques, and temples on every street is built on a deep understanding of human drives and emotions. Only when we put these different parts of our psyche together can we achieve change; to say to anyone who will listen: “I’ve heard the science, I’ve weighed up the evidence. Now I’m convinced. Join me.”

Source: The Guardian
Posted by The Green Market Oracle at 4:09 AM