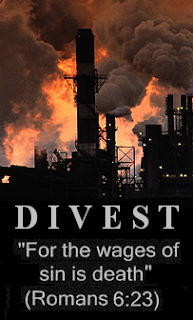 Worried about global warming, a growing number of churches and other faith groups are divesting their holdings in fossil fuel companies that release large amounts of carbon dioxide and other greenhouse gases into the atmosphere.

“The warning in scripture that ‘the wages of sin is death’ could not be more literally true than it is in the case of fossil fuels,” said Serene Jones, president of New York’s Union Theological Seminary, whose board voted earlier this summer to divest its $108.4 million endowment from fossil fuel companies.

“While we realize that our endowment alone will hardly cause the fossil fuel giants to miss even half a heartbeat, as a seminary dedicated to social justice we have a critical call to live out our values in the world. Climate change poses a catastrophic threat, and as stewards of God’s creation we simply must act.”

Jones talks about her seminary’s divestment from fossil fuel holdings as an act of repentance that may resonate well beyond the school.

Other religious institutions that have recently voted to divest from fossil fuels include the World Council of Churches (July 10), the Unitarian Universalists (June 28), and the United Church of Christ (July 2013). Many smaller and regional groups—such as the Episcopal Diocese of Massachusetts, the Shalom Center, and the Oregon Synod of the Evangelical Lutheran Church in America—have also approved fossil fuel divestment.

The General Assembly of the Presbyterian Church (U.S.A.) in June voted to study the issue.

Motivating these moves among the faithful is the concern that their investments ally them with companies identified as among the most damaging to the environment.

Many religious supporters of fossil fuel divestment were further spurred by the National Climate Assessment, a federal report written with the help of 300 experts and the National Academy of Sciences. It concluded that climate change is proceeding at a faster pace than previously thought. It also laid blame at the feet of fossil fuels.

“While scientists continue to refine projections of the future, observations unequivocally show that climate is changing and that the warming of the past 50 years is primarily due to human-induced emissions of heat-trapping gases,” the report reads. “These emissions come mainly from burning coal, oil, and gas, with additional contributions from forest clearing and some agricultural practices.”

The American Petroleum Institute offers a more sanguine view, one at odds with the scientific community.

Many divestment advocates say that only Congress (the United States is one of the largest producers of greenhouse gases) and the international community can enact the limitations needed to stave off the worst environmental disasters that climate change promises, including extreme weather and the eradication of species.

But momentum is still building for smaller-scale action in churches and other religious institutions, said Susan Stephenson, executive director of Interfaith Power and Light, a multifaith group fighting global warming.

“They see that this is a way that they can express their values,” she said.

Unitarian Universalist investment in fossil fuels—less than 3 percent of its $175 million endowment—is typical of religious institutions that have divested or are considering fossil fuel divestment in that the sum is unlikely to hurt energy companies’ bottom lines.

Worries about the economic impact of their divestment vote don’t seem to dissuade many congregants presented with a fossil fuel divestment option. Stephenson said those calling for fossil fuel divestment are mindful that the industry is a big employer and are encouraging investment in so-called clean energy, such as solar and wind power.

“These are jobs that are going to be changing the economy, that are on the economy’s leading edge,” she said. “And it’s very important to help folks who are working in fossil fuel industries to get retrained.” —RNS