A Role Call of Faith Groups Divesting from Fossil Fuels 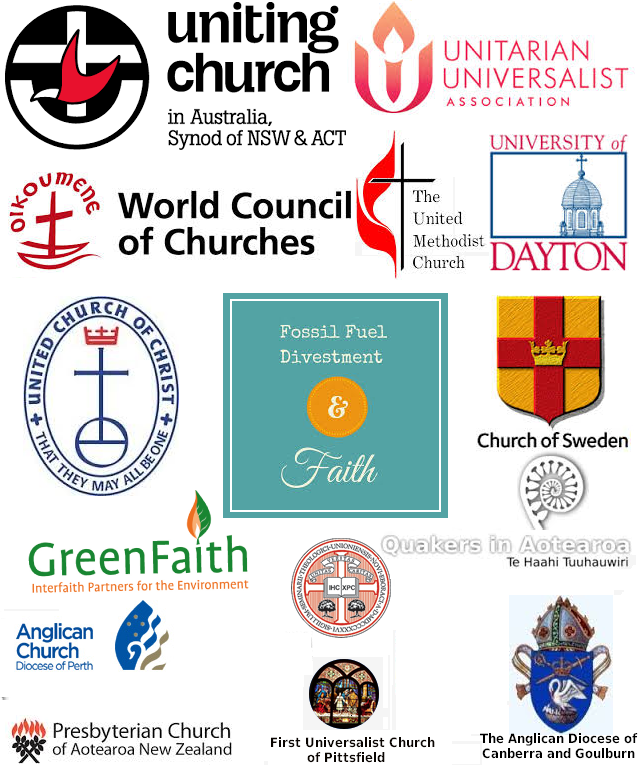 Here is a chronological review of some of the faith communities that are leading the global divestment movement.

The Uniting Church of Australia - New South Wales, an amalgamation of the Methodist and Presbyterian Churches, became one of the first institutions worldwide to divest from fossil fuels.

The Council of the First Universalist Church of Pittsfield, Maine voted to sell its more than 1600 shares of Exxon Mobil stock and pledged to make its entire portfolio fossil fuel free within five years. This move is based on one of the church's Seven Principles, "respect for the interdependent web of all existence."

The United Church of Christ became the first major denomination to vote to begin divesting from fossil fuel companies.

The Unitarian Universalist Association (UUA) a faith-based organization of more than 1,000 congregations with an investment fund of $175 million, voted overwhelmingly to divest from fossil fuel companies.

The University of Dayton withdrew all of their petrochemical investments to become the first US Catholic college to divest from fossil fuels.

The flagship of American progressive Protestant theology, New York City’s Union Theological Seminary announced its plans to pull all investments in fossil fuels from its $108.4 million endowment. The unanimous vote of their board made them the first seminary in the country to take such a step.

At their yearly meeting, the Quakers Eco-Justice Working Group of Philadelphia announced that more than $2 million of assets have been divested from fossil fuels and reinvested in a new Quaker Green Fund.

The World Council of Churches (WCC), decided to divest from fossil fuels. WCC is an umbrella organization made up of 345 member churches which represents over 500 million Christians in more than 110 countries.

GreenFaith released a statement signed by over 80 prominent theologians and religious leaders in support of fossil fuel divestment and reinvestment in a clean energy future.

The Presbyterian Church of Aotearoa New Zealand voted to divest its funds from fossil fuel companies at its biennial General Assembly in Auckland. It also encouraged its church members to do the same with their personal investments.

The United Methodist Church's General Board of Pension and Health Benefits announced it would no longer invest its $21 billion of assets in thermal coal companies, or utilities that derive 75 percent or more of their electricity from coal-fired power plants.

On February 11th, 2015 a group from Christian Climate Action (CAA) protested against the Church of England's investments in fossil fuels at Church House, London during the General Synod. This follows the General Synod's vote in March 2014 to review its investment policy in respect of fossil fuel companies. At this Synod one bishop referring to climate change as "the great demon of our day".

There are now almost 700 campaigns focused on divestment around the world and that includes strong representation from faith based organizations.

The number of religious groups supporting divestment is growing steadily. Is your spiritual community one of them?

Email ThisBlogThis!Share to TwitterShare to FacebookShare to Pinterest
Labels: #divest