Why Faith Communities Must Divest from Fossil Fuels 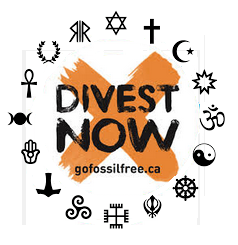 The fossil fuel divestment movement is growing worldwide and faith communities are leading the charge. Divestment sends an important symbolic message about our commitment to preserving God's creation. Although faith-based activism will not eradicate fossil fuels, it brings moral force to the issue and the kind of leadership that can help to win the hearts and minds of people all around the world.

Faith communities have been singled out to lead the divestment movement. Last May United Nations climate head Christiana Figueres called on religious leaders to take a strong stance on climate change, calling it "one of the great humanitarian issues of our time."

Divestment is both a manifestation of core values and a pragmatic approach to managing the financial risks posed by fossil fuels.

Fossil fuels pose and existential risk that threatens all life on earth. Oil and gas companies are poisoning our air and water, destroying our land and bringing about a calamitous future fraught with suffering disease and death. They wreak havoc on the planet they also spend a fortune to influence governments and buy legislators. Their lobbying efforts protect fossil fuel subsidies and tax breaks for oil and gas companies while undermining support for solutions like renewable energy and carbon pricing.

The research indicates that if we are to succeed in curtailing climate change we must leave up to 80 percent of known fossil fuel reserves in the ground. Many faith leaders are listening to the warnings from climate scientists and they are acting in response to the realization that fossil fuels are sabotaging God’s creation.

In a paper titled "Is it Ethical to Invest in Fossil Fuels" Christian theologians, scientists and environmentalists argue that the Church must transition away from fossil fuels and towards clean energy as a matter of life and faith.

Divestment is also a social justice issue because it is the poor and the vulnerable that are most at risk. "With national governments reluctant to take difficult decisions, it falls to us as members of the body of Christ to show leadership in taking action to reduce damaging pollution," Uniting Church President Rev. Prof. Andrew Dutney said, "We simply must act. This is a matter of social, environmental, and intergenerational justice."

Divestment among faith communities is quite rightly presented as a moral and ethical duty. These communities see divestment as part of their responsibility to counter climate change causing emissions.

Rev. Jim Antal, responsible for the 375 United Church of Christ congregations in Massachusetts, said of fossil fuel companies, "we are letting them destroy God’s creation...When people call on their pension funds or schools to divest, they are not only pressuring the institution to change, they are forcing the leaders of the institution and the members of the board to grapple with a moral question."

As explained by Archbishop Desmond Tutu, "People of conscience need to break their ties with corporations financing the injustice of climate change."

As custodians of creation Christians along with other People of the Book (Jews and Muslims) have a biblical responsibility to steward the earth. It is a responsibility that begins with God commanding the first human inhabitants in the garden of Eden, "to till it and keep it". This is in stark contradiction to the behavior of the fossil fuel industry.

Rabbi Warren Stone, Co-chair, National Religious Coalition on Creation Care, "Climate change has become the most significant moral and spiritual issue facing humanity." The best way the we can address climate change is by reducing our reliance on fossil fuels.

Hind Al-Abadleh is an adherant of Islam and an Associate Professor of Chemistry at Wilfrid Laurier University in Waterloo, Ontario. She has argued that for Muslims who derive their value system from the Quran and the traditions of the Prophet Mohammed, combating climate change should be "a priority of high importance."

"[I]f we are to truly live up to teachings of our religion, Muslim investment firms should be among the early birds in divesting from fossil fuels, and investing instead in emerging clean energy technologies likes solar and wind."

Interest in divestment is driven by faith teachings and the desire to build support for a sustainable future. It is part of an effort to challenge the social license of fossil fuel companies and erode their political support. As 350.org founder Bill McKibben said, "morality demands thinking as much about the future as about ourselves–and that there’s no threat to the future greater than the unchecked burning of fossil fuels."

People of faith are called to create a better world for future generations. We cannot simultaneously be good stewards of the Earth while doing nothing to reduce the rate at which we burn fossil fuels. Our faith calls us to act as a function of our moral duty to be good stewards. This is living out our values and our beliefs, this is what it means to have integrity as Christians or as people of faith. Our values preclude investing in fossil fuels and call us to invest in industries that afford a sustainable future.

The United Methodist Church are among those who see divestment as a values based decision. According to Rev. Jenny Phillips, coordinator of Fossil Free UMC, "As a denomination, we can’t continue to say we’re against climate change while saying we’re for fossil fuel profits."

For Christians divestment is about repentance for our failure to properly care for God's creation. The biblical meaning of repentance entails making the decision to change directions. In the context of divestment, this implies that we must transition away from fossil fuels. This is exactly what we must do if we are to succeed in keeping temperatures from rising above the 2 degree Celsius upper threshold limit.

"Scripture tells us that all of the world is God’s precious creation, and our place within it is to care for and respect the health of the whole." Serene Jones, the President of New York City's Union Theological Seminary wrote in an op-ed for Time magazine. "We have sinned, and we see this divestment as an act of repentance for Union...Climate change poses a catastrophic threat. As stewards of God’s creation, we simply must act to stop this sin."

According to many faith leaders we must atone for the sin of our environmental neglect and divestment is an appropriate starting point. The leadership shown by faith communities around the world give us reason to hope that we can succeed in being good stewards of the Earth.

In the Old Testament, God hears Solomon’s cry and replies: "If my people who are called by my name humble themselves, pray, and seek my face and turn from their wicked ways, then I will hear from heaven and will forgive their sin and heal their land."

The road ahead is a difficult one but as explained by Fossil Free Faith, "we need to embrace the courage and hope our faith provides us, and be unafraid to confront and change our dependency on a fossil fuel based economy."

Email ThisBlogThis!Share to TwitterShare to FacebookShare to Pinterest
Labels: #divest