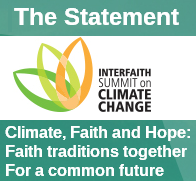 Climate, Faith and Hope: Faith traditions together for a common future

As representatives from different faith and religious traditions, we stand together to express deep concern for the consequences of climate change on the earth and its people, all entrusted, as our faiths reveal, to our common care. Climate change is indeed a threat to life, a precious gift we have received and that we need to care for.

We acknowledge the overwhelming scientific evidence that climate change is human-induced and that, without global and inclusive action towards mitigation and unless fully addressing its fundamental causes, its impacts will continue to grow in intensity and frequency. At the same time, we are ready to dialogue with those who remain skeptical.

In our communities and thanks to the media, we see the manifestations of climate change everywhere. From our brothers and sisters around the world, we hear about its effects on people and nature. We recognize that these effects disproportionally affect the lives, livelihoods and rights of poorer, marginalized and therefore most vulnerable populations, including indigenous peoples. When those who have done the least to cause climate change are the ones hardest hit, it becomes an issue of injustice. Equitable solutions are urgently needed.

We recognize that climate change stands today as a major obstacle to the eradication of poverty. Severe weather events exacerbate hunger, cause economic insecurity, force displacement and prevent sustainable development. The climate crisis is about the survival of humanity on planet earth, and action must reflect these facts with urgency.

Therefore, as faith leaders, we commit ourselves to the promotion of disaster risk reduction, adaptation, low carbon development, climate change education, curbing our own consumption patterns and reducing our use of fossil fuels. Based on our spiritual beliefs and our hope for the future, we commit to stimulating consciences and encouraging our peers and communities to consider such measures with urgency.

We share the conviction that the threats of climate change cannot be curbed effectively by a single State alone but only by the enhanced co-operation of the community of States, based on principles of mutual trust, fairness and equity, precaution, intergenerational justice and common but differentiated responsibilities and capabilities. We urge the rich to support the poor and the vulnerable significantly and everywhere, especially in Least Developed Countries, Small Island States and Sub-Saharan Africa. Significant support would include generous financial resources, capacity building, technology transfer and other forms of co-operation.

We encourage Heads of State and Ministers attending the Climate Summit to announce pledges for the Green Climate Fund, including commitments to increase them thereafter, to establish new partnerships for climate resilience and low carbon development, and to assure access to renewable energies for all people.

As people of faith, we call on all governments to express their commitment to limit global warming well below 2° Celsius. We emphasize that all States share the responsibility to formulate and implement Low Carbon Development Strategies leading to de-carbonization and the complete phase-out of fossil fuels by mid-century.

Consequently we encourage world political and economic leaders to exercise their leadership during the Climate Summit by announcing joint actions such as important short-term emission cuts, phasing out fossil fuel subsidies, coal caps or coal divestment, forest protection, increased energy efficiency in construction and transportation, and other concrete steps. We further call on all governments to identify medium and long-term adaptation needs and to develop strategies to address them based on country-driven, gender-sensitive and participatory approaches to better manage residual loss and damage due to adverse climate impacts.

Ultimately we request all States to work constructively towards a far-reaching global climate agreement in Paris in 2015, building on transparency, adequacy and accountability. The new agreement must be:

ambitious enough to keep temperature from rising well below 2° Celsius; fair enough to distribute the burden in an equitable way; and legally binding enough to guarantee that effective national climate policies to curb emissions are well funded and fully implemented.

As religious representatives and citizens in your countries, we hereby commit ourselves to address the climate change threat. We continue to count on your leadership, and we encourage and expect you to make the right decisions. When difficult decisions need to be taken for the sustainability of the earth and its people, we are ready to stand with you. We pray for you and for all humanity in caring for the earth.

What are you waiting for?

Our advocacy efforts don’t just begin and end with the Interfaith Summit, the statement made by the religious leaders, and the two days in September. In fact, we as communities of faith are already building a collective movement around the world, simultaneously raising our voices, echoing our concerns, and sharing the lived experiences of peoples on “the move” and peoples “on the ground,” facing the already very present threat of climate change.

Various partner organizations have already begun to mobilize in one way or another, providing countless opportunities for individuals like yourself and the communities or organizations you represent to take part. As we march towards September, towards COP 20 in Lima, Peru, and towards COP 21 in Paris, we’re gathering momentum and strategy. Here you’ll find a number of highlighted actions designed for you to lead locally, nationally, and globally. After all, advocacy efforts are only effective if the voices are heard echoing around the world before they reach the multilateral platforms and official negotiations. We as advocates and communities of faith know far too well that in order for us to affect and make change—that it begins with us.

So go ahead, take a stand by signing a petition, making a pledge, or fasting. Amplify your voice through social media. And gather together at events all over the globe, including ones you plan.

Source: Interfaith Climate Summit Declaration
Posted by The Green Market Oracle at 5:47 AM