Executive Summary of the SEC's Most Recent Bishop's Report 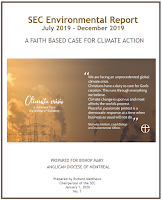 Guided by the Anglican Communion's fifth Mark of Mission, "To strive to safeguard the integrity of creation and sustain and renew life of the earth" the SEC has engaged in a wide range of environmental advocacy including reporting on faith based news, releasing statements, supporting events, and disseminating resources. We have written reports, held vigils and hosted events. We have also engaged in direct action, organized speaking conferences, and created a survey. One of the outstanding highlights of the SEC's efforts was the successful fossil fuel divestment motion that was passed in the Anglican Diocese of Montreal on October 16th, 2015. We are currently working on the production of a short environmentally themed film called Aya'sMirror that is scheduled to be released in September.

In this report I reiterate the reasons why the church should standup for the planet and its inhabitants. Faith communities are well positioned to lead efforts to address climate change and counter eco-degradation. As the Bishop of Salisbury, Nicholas Holtam says this is not just a reaction to anxiety, but it is based in our love for creation. We need to face the scale of the destruction we are causing, and we need to act. According to some the failure of the church to lead on these issues is contributing to the exodus.

At the very least our silence makes us complicit.  No matter how uncomfortable it may make us, we cannot look the other way. The church has been at the forefront of many important human rights issues and this should include climate advocacy. We are called to act by the gospels and by the prophetic voice of young people like Greta Thunberg. We are called to protect the vulnerable, those who have done the least to cause the climate crisis are those who will suffer the most from its effects.

We must act and we must act before it’s too late. As explained in a statement by the World Council of Churches (WCC) Executive Committee “The time for debate and disputation of established scientific facts is long over.” Time for action is swiftly passing, the statement continues. “We will all be held to account for our inaction and our disastrous stewardship of this precious and unique planet.” Nor do we have the time to incrementally address the crisis or focus on individual action. As Archbishop Nicholls said we must do more than advocate for lifestyle changes.  We also need to share the message that science is compatible with faith and the science tells us we must act, and we must act now.

Thankfully many Christians are heeding the call. From the Church of England to local parishes, Anglicans and other faith communities are waking up to the urgent need for climate action. Some Anglicans see the situation as so serious that it warrants civil disobedience.  The issue of climate change is especially significant in the Canadian North where traditional ways are being destroyed by rising temperatures. That is why Anglican churches in the north are taking up the cause and working in support of climate action. One approach that is gaining momentum is the declaration of a climate emergency. Canadian Anglicans recently passed a resolution that called the church to address earth’s climate emergency. Anglicans are also directly appealing to government and calling for government action.

The Season of Creation is an opportunity to highlight ecological concerns. Christians all around the world pray and act in defense of creation including Anglicans in the Diocese of Montreal. This city is arguably among the most climate concerned city on the planet. We are home to the largest climate march in human history which took place on September 27, 2019. Nationally we saw how the environment was a serious issue in the most recent election. Globally we are seeing how Anglicans are coming together with people of faith to resist environmental degradation in places like the Brazilian Amazon and at the UN's annual climate talks.

So much needs to be done and Anglicans are joining people of faith and secular society in this global effort. We need to help build support for climate action and this starts with learning how to speak to people who are misinformed. Perhaps we need to acknowledge the sin of ecological destruction and market idolatry. As Primate Nicholls said, “we failed to notice when that stewardship had been subverted by economic forces, human greed and an attitude of complacency. We answered God’s very first call to us with neglect, disregard and denial”.

Solutions abound and at the top of the list is transitioning to a green economy which includes an energy revolution that will move us away from fossil fuels towards renewable sources of power. Such a revolution is impossible if fossil fuels are allowed to dominate our political landscapes. We need to acknowledge the central role of the fossil fuel industry as both the cause of the problem and as a leading source of disinformation preventing people from apprehending the facts they need to act responsibly.

The church should support protests that defend creation. Such protests can augur change and the involvement of the church amplifies the moral dimension and makes protest more effective.

To access a summary of the SEC's activities over the last five years click here, to read the full report click here or go to the Diocesan Website here and click on the tab marked SEC Environmental Report July 2019 - December 2019. Older reports are also available.
Posted by The Green Market Oracle at 6:37 AM