Right Thought: How We Think about the Natural World 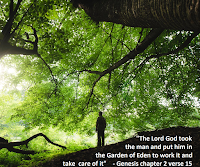 Part of the reason we have failed to preempt climate change and address environmental degradation may be due to the perception of ourselves as being outside of nature. By looking at ourselves through the lens of our connection to creation we are more likely to act in a way that minimizes our impacts. Seeing nature as something extrinsic to our self image may have contributed to our propensity to use nature rather than protect it.

For Anglicans the call to stewardship is rendered explicitly in the Fifth Mark of Mission, "to strive to safeguard the integrity of creation and sustain and renew life on earth." Historically Scripture has sometimes been interpreted to justify humanity's dominance over nature. specifically Genesis 1:26-28.

And God said, Let us make man in our image, after our likeness: and let them have dominion over the fish of the sea, and over the fowl of the air, and over the cattle, and over all the earth, and over every creeping thing that creepeth upon the earth.

And God blessed them, and God said unto them, Be fruitful, and multiply, and replenish the earth, and subdue it: and have dominion over the fish of the sea, and over the fowl of the air, and over every living thing that moveth upon the earth.


Many scholars and theologians have tried to contextualize these passages. Robert Gottfried examines this notion in an article titled, "Dominion Over Nature and Environmental Crises - Time for Another Look". He asserts that Scripture calls us to care for and cultivate nature.  He points out that the verses in Genesis that precede the above citation.

"The Lord God took the man and put him in the Garden of Eden to work it and take care of it" (Genesis 2:15).  Gottfried elaborates on this and surrounding passages.

"In Genesis 2:4-25 humans must care for (abad) and cultivate (shamar) the Garden." Gottfried writes. "The former word means “to serve,” even to the point of "being a slave to.” The latter word, often translated “to keep” or care for, also means to watch or preserve. When God gives humans dominion, then, God charges them to slavishly watch over and care for the community of creation as its servants."

From this point of view Scripture is like an umbilical cord connecting us to creation. Christianity and other faith traditions call us to care for and cultivate nature, while the absence of faith and the rejection of God may lead some to feel disconnected from nature and this can give rise to environmental neglect and abuse.

The atheists disconnection from nature is explored by Ilia Delio in the book, "The Unbearable Wholeness of Being: God, Evolution, and the Power of Love."

Related
Eightfold Path of Environmental Action.
Right Speech - Effective Environmental Communications.
Right Understanding: Knowing the facts about climate change
Right Thought: How we think about the natural world
Posted by The Green Market Oracle at 9:40 AM