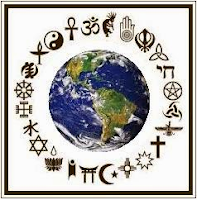 Science and religion are often thought of as being at odds on many issues. On the question of the environment, however, there's widespread agreement.

From Buddhism to Christianity to Hinduism to Islam, various faiths acknowledge the need for environmental stewardship and their holy texts urge adherents to be caretakers of the Earth and its biodiversity.

On 31 May, the United Religions Initiative, Africa and the All African Conference of Churches in collaboration with UN Environment organized an Interfaith World Environment Day celebration in Nairobi, Kenya.

The celebration called for action on the theme “Faiths for Earth—We stand together to save Mother Earth and Together we can Beat Air Pollution”. It also promoted the Green Rule (treat nature as you would like to be treated).

“Without air there is no life and polluted air has become an invisible killer. Annually, about 7 million people die as a direct result of poor air quality. We need to act, and communicate, about the environmental challenges we face and how we can fix them in order to meet our Sustainable Development Goals,” said Gary Lewis, Director of Policy and Programme Division at UN Environment.

“About half of the schools on our planet are owned by faith-based institutions, therefore they play a crucial role in arming the society with knowledge about the damage we are doing to our environment and how we can turn things around,” Lewis said.

As part of the 2019 celebrations, members of various faiths will plant trees and hold an inter-faith forum for youth on 8 June at the Catholic University of Eastern Africa in Nairobi.

As the world marks the 45th World Environment Day, the following are eleven quotes from different religious texts which remind us how faith is connected to the environment:

Baha’i: “Nature is God's Will and is its expression in and through the contingent world.” (Tablets of Bahá'u'lláh, p. 142)

Buddhism: “Our ancestors viewed the earth as rich and bountiful, which it is. Many people in the past also saw nature as inexhaustibly sustainable, which we now know is the case only if we care for it.” (Dalai Lama, 1990a)

Christianity: “We must treat nature with the same awe and wonder that we reserve for human beings. And we do not need this insight in order to believe in God or to prove his existence. We need it to breathe; we need it for us simply to be.” (Ecumenical Patriarch Bartholomew, 2010)

Confucianism: “… sustainable harmonious relationship between the human species and nature is not merely an abstract ideal, but a concrete guide for practical living.” (International Confucian Ecological Alliance, 2015)

Hinduism: “There is an inseparable bond between man and nature. For man, there cannot be an existence removed from nature.” (Amma, 2011)

Islam: “Devote thyself single-mindedly to the Faith, and thus follow the nature designed by Allah, the nature according to which He has fashioned mankind. There is no altering the creation of Allah.” (Qur’an 30:30)

Jainism: "Do not injure, abuse, oppress, enslave, insult, torment, torture, or kill any creature or living being." (Mahavira)

Judaism: “And God said: 'Behold, I have given you every herb yielding seed, which is upon the face of all the earth, and every tree, in which is the fruit of a tree yielding seed—to you it shall be for food.” (Gen 1:29)

Shintoism: “I will give over to my child the rice-ears of the sacred garden, of which I partake in the Plain of High Heaven.” (Nihongi II.23)

Sikhism: “You, yourself created the Universe, and You are pleased… You, Yourself the bumblebee, flower, fruit and the tree.” (Guru Granth Sahib, Maru Sohele, page 1020)

Source: UN Environment
Posted by The Green Market Oracle at 8:25 AM