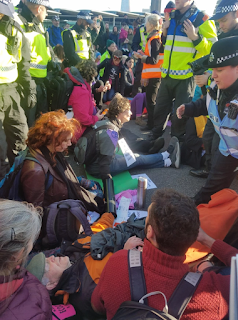 Christian Climate Action (CCA) is one of the faith groups that is taking part in the UK's Extinction Rebellion (XR).  CCA is an Affinity Group within XR and they are taking part in the International Rebellion that calls for "sustained mass disobedience". CCA is part of a wave of protests that started on April 15th and will continue until at least April 27th.

Caroline Harmon is with the CCA group and she said that her group has received messages of support from Christian communities around the world. Many told her that they are "inspired" by the CCA's protest actions.  "The Extinction Rebellion has brought a lot of new people into the world of activism and tapped into new energy." Harmon said. "We’re really keen to see more Christians get involved."

The Extinction Rebellion declaration on 31 October was supported by a number of notable Anglicans including the former Archbishop of Canterbury Dr. Rowan Williams.

The Extinction Rebellion's key demand is a zero carbon economy. As CCA said on their website: "We think that tackling climate change and ecological breakdown is serious enough to demand civil disobedience, so we’re taking part in the Extinction Rebellion this Easter in a campaign of nonviolent direct action calling for action."

CCA is a community of Christians supporting each other in acts of public witness and non-violent direct action, as a way of following Jesus in the face of climate breakdown.
Posted by The Green Market Oracle at 6:16 AM