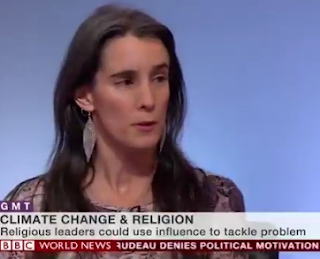 In a recent BBC broadcast, Ruth Valerio discussed the role of religions and faith leaders in efforts to address climate change.

Valerio states that Christians and other faith leaders are well positioned to promote climate action.  "I think faith communities all around the world have a huge part to play. Faith leaders are uniquely placed to be able to support and motivate communities all around the world. They can help their members to take actions both individually and also holding governments to account."

When asked about the church's responsibility with regard to divesting from environmentally irresponsible investments, she said, "we have actually been seeing a big move in that direction," she pointed to the Church of England's "massive steps" through the Transitions Pathway Initiative (TPI). She also said: "Many other denominations in the UK and elsewhere have been taking those steps to signal to the fossil fuel companies that the situation is serious and we need to change."

Valerio is an Environmentalist and theologian, social activist and author. She is also the Global Advocacy and Influencing Director at Tearfund, a Christian charity focused on ending poverty. They work through local churches to unlock people's potential.

To watch an excerpt from the broadcast click here to go to the Renew Our World, twitter feed.

Posted by The Green Market Oracle at 10:03 AM