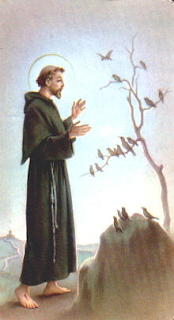 Francis de Sales was born in Italy in 1181 and he was beatified in 1661 by Pope Alexander VII, who then canonized him four years later.  Francis was a soldier in his youth, but after a conversion experience, he renounced his family’s wealth and devoted his life to God.

Francis' devotion to God was expressed through his love for all of God's creation. St. Francis cared for the poor and sick, he preached sermons to animals, and praised all creatures as brothers and sisters under God. His death in 1226 brought three million people together for his funeral. He is well known as the author of the author of the Canticle of the Creatures.

The message of St. Francis is even more prescient today than it was in the 12th century. We are living during what has been described as a mass extinction event where half of the animals on earth are at risk of disappearing. Humans are the primary cause of this extinction and combating climate change may be our best hope of preserving these threatened species.