Resources for Planning a Season of Creation Event 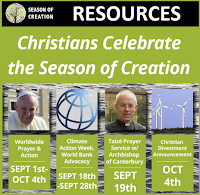 Here are some resources for those interested in staging a Season of Creation event. This celebration calls Christians of all traditions and on all continents to make a special time for prayer, reflection, and care for Creation. Hundreds of events will take place during the course of this celebration that runs from September 1 to October 4.

September 1st was proclaimed as a day of prayer for the environment by the late Ecumenical Patriarch Dimitrios I in 1989. The Orthodox church year starts that day with a commemoration of how God created the world. On 4 October, Roman Catholics and other churches from the Western traditions commemorate Francis of Assisi, known to many as the author of the Canticle of the Creatures.

The proposal to celebrate a "Time for Creation" during these five weeks was made by the Third European Ecumenical Assembly in Sibiu in 2007.