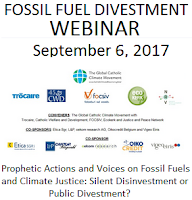 A fossil fuel divestment webinar focusing on the link between divestment and mission will take place on September 6, 2017 – 10am NYC / 3pm GMT/ 4pm Rome/ 4pm South Africa. It is titled, "Prophetic Actions and Voices on Fossil Fuels and Climate Justice: Silent Disinvestment or Public Divestment?"

The aim is to raise the issue of going public with divestment decisions for the next Joint Catholic announcement on October 4, 2017 having prophetic voice.