American Christians on Climate Change: It is Not as Bad as You Might Think 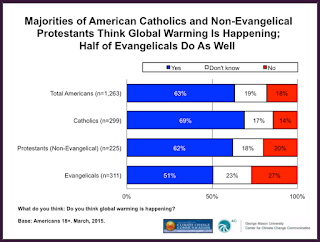 The climate denial we see in Donald Trump and the GOP is not a true reflection of the sentiments of most American Christians. While support for climate denial is evenly split among evangelicals the clear majority of most other Christian denominations think climate change is real. Almost 70 percent of Catholics think climate change is real which is higher than the percentage of Americans in the general population as a whole. Around 62 percent of non-evangelical Protestants think climate change is real. Even more uplifting is the finding that between 73 and 83 percent of Christians support policies that help combat climate change. This includes tax rebates for people who purchase energy-efficient vehicles & solar panels, and research funding for renewable energy. A clear majority indicated that they favor requiring electric utilities to produce at least 20 percent of their electricity from wind, solar, or other renewable energy sources. These numbers hold even if it costs the average household an extra $100 a year. American Christians also express strong support for strict carbon dioxide limits on coal-fired power plants. Sadly, the EPA's Clean Power Plan is being dismantled by the Trump administration.

Most American Christians agree with the statement that "God expects people to be good stewards of nature, which is not only here for human use" over the more literal biblical interpretation that, "God expects people to rule over nature, which is here for human use." More than 80 percent of Catholics, Protestants, and evangelicals say it is important to them personally to care for future generations. A solid majority (63% - 73%) believe we must tend to the world’s poor.

These are some of the findings in a study titled, "Climate Change in the American Christian Mind" which was derived from a national survey of global warming opinion. To download the report click here.
Posted by The Green Market Oracle at 11:13 AM