Report on Faith Based Divestment from Fossil Fuels 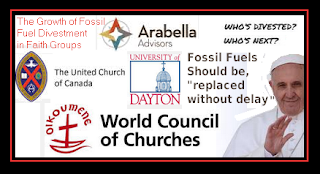 Here is an except focused on faith based divestment from fossil fuels. It is taken from a report called, "Measuring the Growth of the Global Fossil Fuel Divestment and Clean Energy Investment Movement":

Faith communities worldwide continue to divest—and are helping shift the climate debate to one grounded in a moral responsibility, bolstering the divestment and investment movement.

Pope Francis made a forceful call to action to the world’s leaders and 1.2 billion Catholics, calling climate change “one of the principal challenges facing humanity” in his encyclical released in June 2015, Laudato si’: On Care for Our Common Home. The Pope made a clear case for transitioning to a clean energy economy, writing that climate change is driven in part “by a model of development based on the intensive use of fossil fuels” and they should be “replaced without delay.” Increasingly Catholic investors are looking to align their investment practices with their values. The University of Dayton led the way in 2014 as the first Catholic institution to divest its assets.

Faith leaders continue to be strong advocates for divestment, as 126 faith-based organizations with a collective $24 billion in assets have committed to divest to date. The World Council of Churches, which holds nearly $68 million in assets, divested its holdings from fossil fuels and encouraged its members to do the same. The organization has immense reach: its members include more than 350 denominations—including Orthodox, Anglican, Baptist, Lutheran, Methodist, Reformed,

United, and Independent churches—and collectively comprise more than 500 million Christians worldwide. The World Council of Churches general secretary said: “By not investing in [fossil fuel] companies, we want to show a direction we need to follow as a human family to address climate changes properly.”

Christian faith groups are not alone in leading moral action on climate. In August 2015, Islamic leaders from 20 countries signed a declaration calling for an end to fossil fuels, writing “excessive pollution from fossil fuels threatens to destroy the gifts bestowed on us by God, whom we know as Allah...what will future generations say ofus, who leave them a degraded planet as our legacy?”