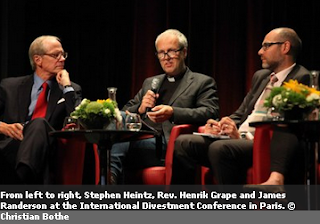 With just two months before the crucial United Nations Climate Change Conference (COP 21), an International Divestment Conference was held in Paris, on 1 September, where Rev. Henrik Grape represented the World Council of Churches (WCC) as a key speaker.

“The logic of divestment couldn’t be simpler: if it’s wrong to wreck the climate, it’s wrong to profit from that wreckage,” said Grape.

The conference focused on the growing movement to withdraw investments from fossil fuels that create emissions causing climate change, and to invest in sustainable energy.

Underpinning the conference was the knowledge that if the known global fossil fuel reserves are burnt, they would emit more than three times the maximum emissions that the climate could bear, creating catastrophic rises in sea levels, extreme weather events and the failure of fisheries and agriculture. For the safety of humanity, these fossil fuels have to stay in the ground, argued the conference participants.

Grape said that, in particular, “poorer countries in the tropics are already experiencing climate change disasters, and the WCC member churches around the world bear witness to this. But extended droughts and increasingly severe weather events are also affecting other areas of the world.”

Grape, who comes from the Church of Sweden, joined Stephen Heintz, president of the Rockefeller Brothers Foundation and James Randerson of The Guardian newspaper, among others, on a conference panel.

Grape explains: “The 1st of September is the start of Time for Creation, a time of prayer for creation. The whole ecumenical family of faith communities join to pray and to act for a more sustainable world.”

“It is also Fast for the Climate day, which unites faith communities over the world for action on climate change. These are not meaningless actions. Praying and fasting push us to take concrete actions. Our prayers and actions need to be consistent, we should put our money where our mouth is,” he added.

“Divestment is an ethical issue, and on ethical criteria WCC decided not to invest in fossil fuels. Member churches have done the same; we’ve done it in the Church of Sweden, for example. And since divesting, the return on our investments has improved. For the third consecutive year, returns on the total portfolio have outperformed the reference portfolio returns.”

He continued: “Climate change is the main challenge to our time. We need to make a real change to avoid a future that will be hard for coming generations to deal with.”

“Justice and equity are part of the spiritual vision that faith communities bring.”

Grape went on to say that “Hope is a first step to walk the path of transformation.” He quoted St. Augustine: “Hope has two beautiful daughters. Their names are anger and courage; anger at the way things are, and courage to see that they do not remain the way they are.”

Grape concluded: “Faiths can be the carrier of hope and its beautiful daughters, anger over the inequalities and greed that destroys the earth and the possibilities for future generations—courage to start the transformation needed for a more just and equitable world.”