Climate Change and Faith: Why We Are Asking the Diocese to Divest from Fossil Fuel 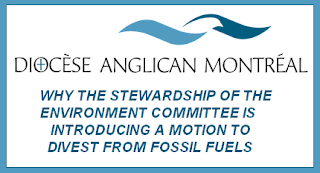 Careful research over many years has revealed a difficult truth: carbon emissions from human sources are the primary driver of climate change that is threatening ecosystems and people.1 This truth is difficult because since the 19th century carbon has fueled industry and it is now tightly woven into many aspects of our daily life. Transitioning to a low-carbon economy seems daunting. However, this is a necessary transition to make. Experts agree with very high confidence that climate change will “increase risks for people, assets, economies and ecosystems, including risks from heat stress, storms and extreme precipitation, inland and coastal flooding, landslides, air pollution, drought, water scarcity, sea level rise and storm surges . . . these risks are amplified for those lacking essential infrastructure and services or living in exposed areas.”2 Let us not allow cynicism and despair to lead to apathy, even in the midst of crisis we as people of faith are called to hopeful acts of self-giving love.

How can Anglican Canadians work together to combat climate change? We can join with our faith partners in using our moral authority to pressure the fossil fuel industry and governments to transition to a low-carbon economy. After study, conversation and prayer, the Stewardship of the Environment Committee, which has been charged with leading the Diocese to, “strive to safeguard the integrity of creation and sustain and renew life on the earth,”3 brings before the upcoming Synod a motion for divestment from the top 100 public coal companies globally and the top 100 public oil and gas companies globally, ranked by the potential carbon emissions content of their reported reserves.4

Passing this motion will unite us with other concerned faithful taking action against climate change, including the Church of England which earlier this year, following a period of extensive study, published a climate change ethical investment policy that calls for divestment where engagement with industry has failed to effect change,5 and the United Church of Canada, which in August voted to divest from the largest 200 fossil fuel companies. The essential role faith communities play in combatting climate change has been compelling articulated by Pope Francis II in his recent encyclical statement “Praised Be” and by the Islamic Declaration on Climate Change, the latter of which explicitly calls for reinvestment from fossil fuels into 100% renewable energy.6

Divestment matters. Some argue that organizations that divest cannot make an appreciable difference since their investment in the industry is insignificant. Currently the industry is resisting transition to a low-carbon economy while spending huge amounts of money lobbying governments that have the power to enact regulations to control climate change. Divestment is effective because it reduces the power and control of the fossil fuel industry; it publically hurts their image. All of the above actions and statements made by faith communities have been widely publicized; each instance cuts at the deep ties between the industry and government and pressures governments to take seriously the pressing need to mitigate the impacts of climate change and transition to a low-carbon economy.

Divestment makes good sense financially. The “carbon budget” is the estimated amount of carbon dioxide the world can emit while still having a likely chance of limiting the global temperature rise to 2 C above pre-industrial levels. Burning all the fossil fuel that corporations already have in their reserves would lead to emitting significantly more than what is considered theoretically safe.7 If we wish to prevent the catastrophic destruction of the planet all of these reserves cannot be burned; that which remains will become stranded assets. To be good stewards of our finances we should divest from fossil fuels now.8 9

As Canadian Anglicans we are particularly called to take action around climate change. The Canadian Arctic is a global hotspot of the effects of climate change and Aboriginal populations, particularly the Inuit, are highly vulnerable.10 11 Negative health implications caused by climate change have already been documented; these included affects on personal safety, food and water security and mental health.12 Indigenous Canadians are seeking allies in the fight against the devastation of their lands caused by the fossil fuel industry, particularly when it comes to tar sands oil. For example, the Beaver Creek Cree filed a lawsuit against the Alberta and Canadian governments and are preparing for trial in relation to the cumulative ill-effects fossil fuel extraction on their lands has had on their treaty rights to hunt, fish, trap and gather plant-medicine. Crysal Lameman of the Beaver Creek Cree Nation argues that divestment and indigenous rights protection should work together.13

What about those Canadians whose livelihoods are tied up with the fossil fuel industry? This is a very important question. This divestment motion is not an indictment of individuals who work in the fossil fuel industry. As stated above, however, the need to make this transition is unquestionable. It is essential to develop green jobs so that those with little economic power, including indigenous Canadians who depend on the fossil fuel industry for their livelihoods, are not abandoned and left behind without the work skills needed to thrive in a low-carbon economy. Fossil fuel corporations are not taking adequate steps to assist their own workers with this necessary transition. Fighting for a just transition could produce more jobs than refusing to act for fear of the impact on fossil fuel industry workers. BlueGreen Canada14 published a well-researched report that shows that “if the $1.3 billion in government subsidies, now given to the oil and gas sector, were instead invested in renewable energy and energy efficiency, Canada would create more jobs: 18,000 more.” The report also discusses in detail the economic risks of relying increasingly on the volatile oil market.15 Divestment from fossil fuel is not an act of ignoring those who currently work in the industry; rather, it is a statement of support for these individuals, alongside the poorest everywhere in the world, who will suffer the most from a failure to make a timely and intentional transition to a low-carbon economy.

God has given us the gift and responsibility of being the stewards of our earthly home. Desmond Tutu, in an impassioned plea to use the same methods to combat climate change that were used to force the end of apartheid in South Africa, writes, “It is a responsibility that begins with God commanding the first human inhabitants of the garden of Eden ‘to till it and keep it.’ To keep it; not to abuse it, not to destroy it.”16

The research and study has been done; now is the time to act. Divestment is not the only action we need to take, but it is an important step. We strive to lead the Anglican Diocese of Montreal in being a leader in combating climate change; please join us.

Please click here, to see why the Stewardship of the Environment Committee is advancing a motion advocating for fossil fuel divestment in the Anglican Diocese of Montreal.