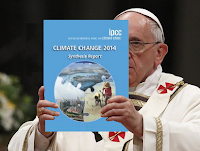 The position of Pope Francis on the environment is premised on good science. In essence he agrees with the salient findings of the IPCC. While the Pope may not be a working scientist, he does have a "titulo" degree (between a bachelors and a masters) in chemistry and he even worked for a time as a chemist. Perhaps most importantly he regularly consults with leading scientists.

It is important to understand the amount of scientific research that went into the Pope's encyclical. For many months those who were assisting the pope and the pope himself consulted with scientific experts in their respective fields.

First and foremost, the pope has access to the Pontifical Academy of Sciences which includes 80 of the world's top scientists. Together academy members have 48 Nobel prizes and a number of these scientists are specialists in the area of climate change and sustainability. The research papers written by this group includes, Fate of Mountain Glaciers in the Anthropocene (2011), Sustainable Humanity, Sustainable Nature: Our Responsibility (2014) and Climate Change and the Common Good (2015). Recently the Academy held a conference at which they called for a moral awakening that includes the rejection of fossil fuels.

So while the pope may not be a working scientist, he has availed himself of the best and brightest scientific minds who have helped to inform his perspective on climate change.

The pope may ultimately be a moral authority, however, he has taken the time to gain a good comprehension of the science which helps to ensure that his moral footing is sound.