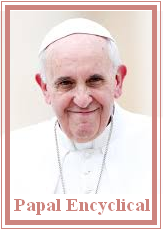 Here is a leaked preview of Pope Francis' much awaited encyclical which is due to be officially released today (Thursday June 18th) at noon. As expected the Pope has come out as one of the world's foremost environmental leaders. He praises the environmental movement, warns of the need for change and calls out climate deniers. The Pope wades into some of the finer points of the climate discussion even taking a stand on carbon trading.

As reported by The Guardian, the leaked version of the encyclical calls us to avoid "unprecedented destruction of our ecosystem. The 192 page document warns of "grave consequences for all of us," if we fail to make adjustments in the way we live our lives and change the way we consume energy.

Pope Francis unabashedly tackles the issue of climate change and plainly attributes it to "human activity." He also squarely refutes the position of climate deniers like Republicans in the US Congress. His draft reads

"The attitudes that stand in the way of a solution, even among believers, range from negation of the problem, to indifference, to convenient resignation or blind faith in technical solutions."

Pope Francis echoed the sentiments of his predecessor pope Benedict XVl when he called for a new global authority to tackle pollution and poverty.

The encyclical was released on Monday by an Italian magazine L'Espresso.

Although the papal encyclical comments on climate change are premised on scientific conclusions its focus is on humanities "God-given" responsibility to combat it.

The draft starts with a comment about the Earth and how humanities treatment of the Earth is wrong. He specifically mentions "the irresponsible use and abuse of the goods that God has placed on her." He goes on to say that we mistakenly believe that, "we were her owners and dominators, authorised to loot her. " Evidence of our malfeasance can be found in the "Earth, the water, the air and in living things."

The document is intended for all the people of the Earth regardless of their religious views. One of the more surprising statements in the draft disputes the value of carbon credits saying they "could give rise to a new form of speculation and would not help to reduce the overall emission of polluting gases". On the contrary, the pope wrote, it could help "support the super-consumption of certain countries and sectors".