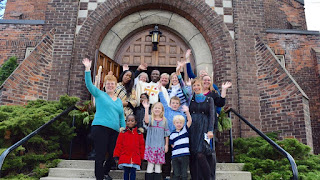 Here is a good example of what churches have done to raise awareness and encourage activism. St. Cuthbert's Church in Toronto has adopted a community approach involving local leaders. To commemorate Earth Hour St Cuthbert's organized a panel discussion on environmentalism that included a District School Board trustee, MPP for Beaches-East York, and a spokesperson for the Anglican Church of Canada. St. Cuthbert’s Anglican Church, 1399 Here are some of. St. Cuthbert's efforts as summarized in a 2017 Toronto Observer article by Alexa Battler.

“This church has been in the community longer than this place has been a town. (We are doing this) to be relevant to our neighbourhood, to be helpful,” said Lorna Krawchuk, who co-ordinated the fair and is a former city councilor.

St. Cuthbert’s is one of many churches to commit to environmental awareness and action as part of the Anglican Church of Canada’s Creation Matters program.

The fair began with a morning sermon led by the church’s reverend, Ian LaFleur, who also gave the event its name.

“All of creation is a gift,” he said. “Life flourishes when we take care of it.”

The congregation also heard an address from Ryan Weston, a spokesperson for the Anglican Church of Canada.

Around 20 vendors ran information booths on environmentally friendly products and services, including electric cars, local and fair-trade foods, solar power and even eco-funerals.

Toronto city councillor Josh Matlow answers questions about environmentalism in government at St. Cuthbert’s Church. “(I am here) to remind people of the good initiatives that we’re taking to protect the environment, but also how much more we have to do together,” Matlow said. “If we don’t discuss our priorities then people don’t know what they can do as individuals to contribute.”

St. Cuthbert’s has undergone an energy audit to tighten up its power usage. The church keeps the heat low and the lights off whenever possible. Its stained-glass windows were reinforced with another sheet of glass to keep heat from escaping, and their lights are gradually being replaced by LED alternatives.

Rain bins, green bins and careful recycling (including clothing drives twice per year) keep garbage minimal. Participants grow over 13 types of vegetables and 10 types of herbs in their gardens, which are then served in the church.

Last year, in response to global declines in bee populations, the church added a pollinator garden, with four different types of flowers native to East York.

“For a long time, we’ve really struggled with (the question) what does that mean to love your neighbour? Now we are entering into this idea that neighbour should include endangered species,” LaFleur said.

To end the day, the massive white oak tree outside of the church was officially recognized as an Ontario Heritage Tree. Forests Ontario has been recognizing trees that have unique features, historical relevance, or artistic significance since 2009. For Canada’s 150th anniversary, Forests Ontario will be recognizing 150 notable trees.

St. Cuthbert’s tree was the first.

Steve Housell, president of Forests Ontario, said the tree is a “landmark of St. Cuthbert’s Anglican Church and the Leaside community, one that has resided over generations of community and church events.”

Premiere Kathleen Wynne was among the special guests at the ceremony.

From left to right, president of Forests Ontario Steve Housell watches event coordinator Lorna Krawchuk address the crowd while Premiere Kathleen Wynne admires the great white oak.  “It’s individual families and individuals who are the stewards of the environment when it comes down to it. We can pass policies at the government level but people have to take action,” she said. “It’s at that level that we really have environmental activism.”

Another sermon was held by candlelight during Earth Hour.

“We’re here tonight to acknowledge the profound interdependence of all life on Earth,” guest speaker Rev. Canon John Hill said during a reflection, “for better or for worse.”

Source: Toronto Observer
Posted by The Green Market Oracle at 6:05 AM