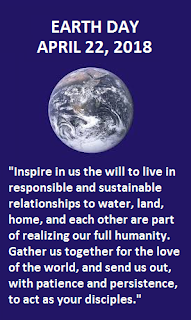 Sunday, April 22, marks the start of Earth Week and as we approach the half-century mark for this important event we are forced to confess that while we have made some important strides, we have not been good stewards of God's creation.

Religious groups are celebrating Earth Day in record numbers. Many faith traditions are offering toolkits and environmental resources. Hindus are engaging in environmental action through the Bhumi project and Buddhists are discussing ecology. Both Muslims and Sikhs released statements on climate change and Jews shared ways of tracking environmental action in synagogues.

Many people including Anglicans feel called by their faith to act on environmental degradation and climate change. It therefore follows that faith communities are at the forefront of efforts to respond to one of the most serious crises humans have ever faced. As people of faith, we are called to engage by taking personal responsibility and sharing this important message with others both within and outside of our faith traditions.

Religious institutions offer fertile soil in which environmental awareness can grow. Through the combination of their moral authority and their grassroots presence faith communities have both the justification and the audience to foster environmental awareness and action. Places of worship are an ideal place from which to inform and mobilize people to bring about positive social and environmental change.

Over the course of this last year, we have witnessed the abandonment of climate action from the government of the most powerful country on Earth. Even Canada has acknowledged that it will not meet its carbon reduction targets in 2020. We saw ongoing species extinctions including the loss of the last male Northern white Rhino last month. We are also seeing rising CO2 levels, hotter temperatures, rising sea levels, extreme weather, melting ice, collapsing fisheries, water scarcity, expanding deserts, forest fires, and dying coral reefs. The biosphere is in crisis and people of conscience are standing up to act in defense of Creation.

Despite these troubling trends we have demonstrated that we are capable of being good stewards if we can muster the awareness and the will to act. Religious groups have given us cause to hope as they have emerged as leaders in the global environmental movement.

The role of faith communities has never been more important, they have a crucial role to play providing the inspiration, hope, and courses of action that help to protect our planet. We also have a responsibility to assist the world's most vulnerable people who are also the ones most likely to be the first to bear the brunt of our environmental crises.

A wide diversity of faith groups have shown leadership including the Anglican Diocese of Canada which passed a number of ecologically themed motions at Synod.

We have seen faith communities all around the world stand up to oppose fossil fuels as the leading cause of climate change. A number of Catholic orders and Anglican Dioceses across Canada including the Diocese of Montreal are among many faith communities that have divested from fossil fuels.

Springtime offers an opportunity to contemplate themes like renewal, rebirth, preservation, and social justice. Easter is an ideal time to seriously reflect on our relationship to the natural world.

"Passover and Easter both celebrate life and its renewal, as does Earth Day," says Gary Gardner, author of Invoking the Spirit: Religion and Spirituality in the Quest for a Sustainable World. "The coincidence of these religious and secular events is symbolic of the increasing collaboration among the religious and sustainability communities."

In previous years, Christians have given up fossil fuels for Lent and in 2018 many Christians gave up plastic. Anglicans including Bishop Mary in the Anglican Diocese of Montreal heeded the call to give up plastic waste this year.

This is appropriate given that ending plastic waste is the theme of Earth Day 2018. The problem of plastic waste is serious as it impacts many life forms on this planet including humans. Our role in creating this problem is reflected in what Pope Francis calls, "the throwaway culture".

The tragedy of human waste was made painfully clear earlier this year when a six-ton sperm whale washed up on the shores of southern Spain with a belly full of plastic. Millions of fish, turtles, and birds are killed each year by plastic waste.

According to a 2015 study, as much as 12.7 million metric tons of plastic ends up in our oceans each year. At the current rate, there will be more plastic than fish in our oceans by 2050. This plastic is finding its way into our food chain and even the water we drink. Plastic's endocrine disrupting impacts are also a threat to human health.

We have seen many other hopeful signs of progress since Senator Gaylord Nelson (D-Wisc.) founded Earth Day in 1970. This includes reduced water and air pollution (ozone, mercury emissions and short-lived climate pollutants).  We have also seen more species conservation and habitat preservation, while radically reducing our use of.asbestos, DDT, and leaded gasoline. We have also made progress on acid rain, recycling, and toxic waste.

The crowning achievement was the hopeful outcome of COP21 where every nation in the world agreed to reduce greenhouse gas emissions to combat climate change. Since then we have seen some backsliding as greenhouse gas emissions continue to rise around the world.  Our oceans are becoming more acidic and our biosphere is ebbing ever closer to tipping points from which we will not be able to recover.

"We are hard pressed on every side, but not crushed; perplexed, but not in despair; persecuted, but not abandoned; struck down, but not destroyed." (2 Corinthians 4:8-9). We may be in crisis but we have hope. "For I know the plans I have for you," declares the LORD, "plans to prosper you and not to harm you, plans to give you hope and a future." (Jeremiah 29:11).

Christians of all denominations are defending creation by engaging in Earth Day activities. Churches are adopting liturgical celebrations and participating in community events to commemorate Earth Day. Both the Catholic and United churches are actively involved in Earth Day celebrations.

As Anglican and Lutheran leaders stated in their Earth Day message, "we invite you to join us in praying for the humility and discipline to use Earth’s resources wisely and responsibly." They also said, "As we read this prayer today, we are reminded of the importance of relationships, including our relationship with Mother Earth. We are also reminded that through prayer God calls us to action." They spoke of the need to address, "the very real impacts of climate change already being felt in Canada and around the world."

They suggested several ways of reducing our impact on the Earth including reducing plastic waste. They also suggested that we conserve water, eat locally,eat less meat, use zero or lower carbon transportation.

The statement also urged individual parishes to consider what they might do to "nurture responsible and sustainable relationships to water, land, home, and each other." They suggested a number of helpful approaches including reducing the environmental footprints of faith communities and working with others to implement actions that care for the earth.

The statement ended with the following prayer, "Inspire in us the will to live in responsible and sustainable relationships to water, land, home, and each other are part of realizing our full humanity. Gather us together for the love of the world, and send us out, with patience and persistence, to act as your disciples."

The task before us is daunting, to some it may not seem possible, however, we are buoyed by faith.

"Jesus looked at them and said, “With man this is impossible, but not with God; all things are possible with God." (Mark 10:27). We have much work to do and we all have a part in heeding the call to care for God's creation. "Be on your guard; stand firm in the faith; be courageous; be strong."
(Corinthians 16:13).

Last year the Stewardship of the Environment Committee in the Anglican Diocese of Montreal organized a youth litter pick up day. This year we are working on a series of short videos to help raise awareness and encourage action. As part of the research for these videos, we are reaching out to survey attitudes about nature. Please consider completing this short survey.
Posted by The Green Market Oracle at 9:47 AM