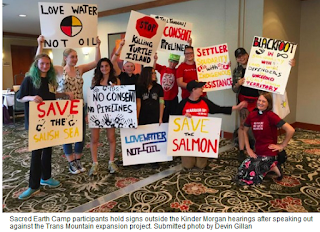 A group of budding young environmental leaders immersed themselves in the eco-justice issues of the lower Fraser Watershed from July 31 to August 13, publicly expressing their opposition to the proposed Kinder Morgan Pipeline expansion project as the first Sacred Earth Camp unfolded in the Anglican Diocese of New Westminster.

Taking place at A Rocha’s Brooksdale farm in South Surrey, B.C. with trips around Coast Salish territory and the lower mainland, the camp aimed to teach youth and young adults about the local bio-region and to help them learn the spiritual and practical skills necessary to become long-term leaders for environmental justice.

Sacred Earth Camp is a project of Salal + Cedar, a new diocesan church plant rooted in the tradition of watershed discipleship. Partial funding came from the national Ministry Investment Fund and the social justice branch of the Primate’s office.

The Rev. Laurel Dykstra, director of the Sacred Earth Camp and priest in charge of Salal + Cedar, noted that the camp was catalyzed by the diocese’s Marks of Mission Champions initiative, in which “youth expressed significant concern about environmental justice, a strong desire to be effective agents of change—and little practical knowledge about how to do that”.

Participants ranged in age from 12 to 23, encompassing settler, Indigenous, and migrant youth. Seven participated in the full two-week program and three took part only in certain activities, while at least 70 other people, from infants to elders, participated in events, community activities, or camp life at some point.

Delving into issues from endangered salmon to climate change, participants chose to focus on Indigenous land justice in the form of opposition to the Kinder Morgan Trans Mountain Pipeline expansion project. The proposed expansion would create a twinned pipeline through Burnaby Mountain on Coast Salish territory, nearly tripling the flow of oil from 300,000 barrels per day to 890,000 barrels.

Prior to the hearings on August 11, campers held a prayer vigil in a park near the Kinder Morgan terminal. Dykstra noted that as part of the vigil, the youth made votive candles expressing “their prayers for land and water, their hopes for the future, and their desire to overcome fossil fuel addiction. These burned outside the hearings while the young people gave their testimony.”

While attending the hearings, participants dressed in and wrote signs using the colours of the medicine wheel to represent Indigenous justice and the diversity of voices opposing the project. Some prepared speeches, and all of the campers delivered a spoken-word performance together.

“The youth were extremely well received at the hearings and got some media attention—CBC, BurnabyNOW, Save the Coast,” Dykstra said.

“But they were very disappointed to see their focus on Indigenous land justice changed to a story about church-youth environmentalism,” she added, citing one media outlet that interviewed four youth but “failed to air the words of the one Indigenous youth living in the impacted community.”

Throughout the rest of the camp, participants engaged in numerous activities based around environmental stewardship. Each morning, they took part in one of three work areas—farm and garden, conservation and habitat restoration, or meal preparation—while evening offered time for reflection.

Reflecting on the inaugural Sacred Earth Camp, Dykstra indicated a positive reaction among those in attendance.

“The camp was a great success, and there will be more like it in the future.”

Source: Matt Gardner, The Anglican
Posted by The Green Market Oracle at 10:44 AM