Ecological Resolutions Pass by an Overwhelming Margin at Synod 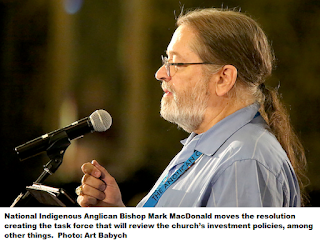 General Synod passed, by large majorities, two resolutions Tuesday, July 12, related to responsible investing. Resolution A171 calls on the church to form a task force “as soon as possible,” to review its investment policies; address governance practices of companies and sectors in which it invests; and develop “guidelines for constructive dialogue, and where necessary divestment, leading towards a low carbon economy.”

The resolution also mandates the task force to present an interim report to Council of General Synod (CoGS) by next May, and to report every year “on actions taken or under consideration that would make visible the Anglican Church of Canada’s commitment to environmental, social and governance principles and to propose a strategy for ongoing engagement and monitoring.”

The resolution also specifies that the task force include “the widest possible range of internal stakeholders”—not just those charged with managing the church’s investments, but also “those with interests related to sustainable environmental investing.”

The resolution, moved by National Indigenous Anglican Bishop Mark MacDonald, received the approval of 91.9% of voting members of General Synod.

The other resolution, A170, calls on General Synod to sign the United Nations Principles for Responsible Investing and to “make full use of” its affiliate membership of the Shareholder Association for Research and Education (SHARE), while encouraging dioceses to become affiliate members also.

Of General Synod’s voting members, 90.4% were in favour of this second resolution, also moved by MacDonald.

Resolution A171, which establishes the task force, attracted by far the most debate. Several members spoke in favour of the resolution for stopping short of an outright call for divestment from the fossil-fuels industry. Others applauded the resolution’s requirement that the task force include a wide range of “stakeholders.”

“We’re in very different places across the country,” said Dean Iain Luke, of the diocese of Athabasca. “We have different stakes in these issues, so it’s important that all those voices be heard.”

His diocese, Luke said, had already considered divesting. He added that its response reflected “what may not be a familiar perspective to people here.”

Jeremy Munn, a lay member from the same diocese and a resident of Fort McMurray, which is widely considered the heart of Canada’s oil patch, said he would be among those directly affected by decisions the church was likely to make on responsible investing. Engaging directly with companies, he said, is a better way of bringing about change in the industry than divesting.

In some cases, action against companies deemed to be polluting ends up hurting its employees the most, Munn said.

“When you speak against these companies, that aren’t based in the communities, you’re speaking against people. The corporation isn’t there,” he added.

Danielle McKenzie, a lay member also from Athabasca, said that although she favoured a review of the church’s investments, she hoped any decisions would carefully take into account their impacts on the people who work in the fossil fuel and other industries.

“The strong statement made by divesting can be a painful one for some,” she said. “Many of us know what it is like to be hurt by decisions made by the church. Let us think twice about making statements at the national level that hurt others and do little to change an environmental impact. Our prime focus should be on the issues of clean production and consumption.”